Abythic - Dominion Of The Wicked 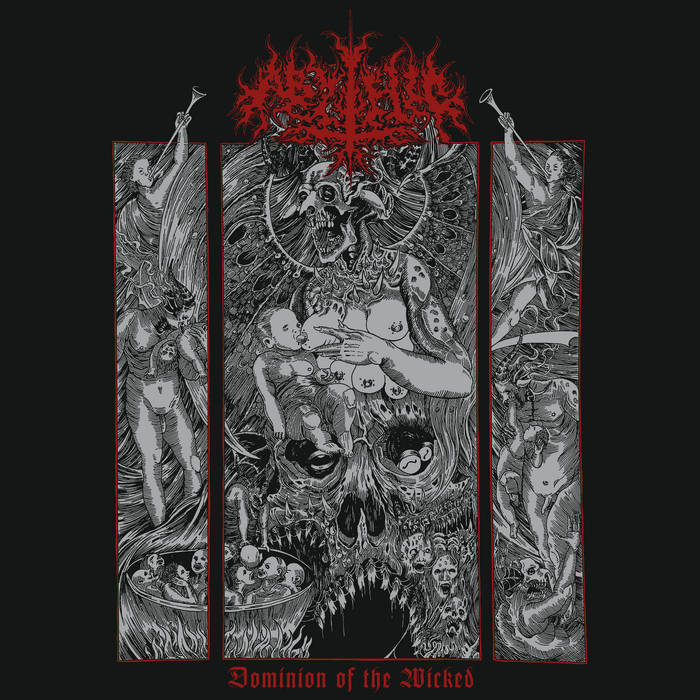 Dagger ov Light I am so honored to have access to theze beautiful soundz! Namaste.

Hailing from North Rhine-Westphalia, Germany, ABYTHIC formed in 2015 and soon recorded & released their first demo, A Full Negation of Existence. Aptly titled, the demo portrayed four foul tracks of churning death metal of a most early '90s mold. Alas, that was an all-too-brief teaser for 2018's subsequent Beneath Ancient Portals, the band's celebrated debut album. Here, ABYTHIC took the demo's same rudiments - patient and pulsing riffing, linear composition, an emphasis on doomy downtempo segments - and brought them to fuller fruition. By the time of their second album, Conjuring the Obscure, the following year, founding drummer MDB took over on guitar and asserted more creative control, resulting in a viscous, more resolutely doomed-out iteration of the ever-sturdy ABYTHIC aesthetic.

And now, that "doomed-out" iteration gets really DOOMED-OUT on ABYTHIC's third album, Dominion of the Wicked. Clearly on a creative roll - or the "roll" of a tank tread, as it were - Dominion of the Wicked is the sound of desolation given thundering might, heaviness (in all senses of the word) stretched apart to alternately suffocating/spacious extremes. Granted, ABYTHIC still retain that proud 'n' powerful class as informed by mid-period Bolt Thrower, Asphyx, Grave, and Pentacle, but with four songs spanning a stultifying 35 minutes, Dominion of the Wicked both challenges the listener and makes for masterfully atmospheric listening. In fact, those 35 minutes are so engrossing, so majestically hypnotic yet HEAVY, those minutes feel more like years, such is the time-evaporating power ABYTHIC have so studiously built these last few records. Credit due, then, to the band stripping down to a power-trio, with the emphasis clearly on POWER.

Some bands sell out; others slow down. ABYTHIC may've slowed down, but they've certainly not "sold out" - rather, they've merely begun a new creative re-awakening that's borne dark, delicious fruit. Enter their Dominion of the Wicked!