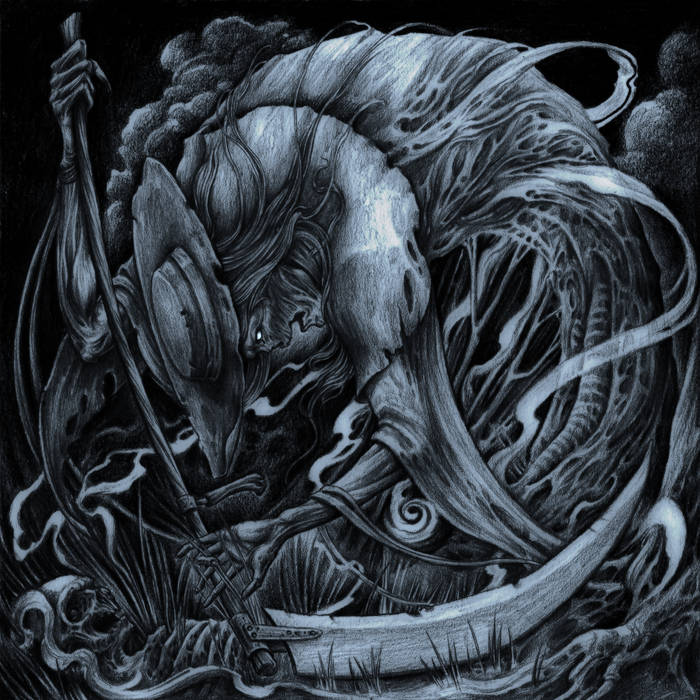 IRON BONEHEAD PRODUCTIONS, in conspiracy with DARK ADVERSARY, is proud to present BLACK FUNERAL's highly anticipated ninth album, Ankou and the Death Fire. Formed in 1993, BLACK FUNERAL are one of the founders of American black metal. The band's first two albums, 1995's Vampyr - Throne of the Beast and 1997's Empire of Blood, are widely considered black metal classics, and are among the earliest releases on the cult Full Moon Productions label. Since the beginning, the band has been guided by the boundless vision of one Michael Ford, who has concurrently garnered international respect as a leading author on Luciferianism and occultism. And although many lineups have come and gone since those pioneering first two lineups, BLACK FUNERAL has now found its strongest formation yet with Ankou and the Death Fire, including Drowning the Light mastermind Azgorh Drakenhof handling guitar, bass, and keyboards. As such, musically, Akkou and the Death Fire is a purely black metal record brimming with medieval majesty and malnourished misery, a black flame both bright and bleary, all laced with Ford's characteristically chilling ambient soundscapes.

Ankou and the Death Fire is an album guiding the listener through the otherworldly realm of shadows, darkness, and the mythological cycle of death from the inspiration of ancient Celtic lore. From the Iron Age through the Medieval Celtic period, Ankou and the Death Fire is centered on myth and traditions of Death and the Otherworld. Guitarist Azgorh entombs a cold and ancient foundation in grim and withered melodies, while the drums of An Unnamed Spirit inspire the phantom marching of the dead. Vocalist Akhtya Nachttoter (AKA Michael Ford) artfully layers otherworldly howls and screams at different frequencies to guide the listener into the gashing jaws of Death and the legions of dark spirits and reapers of the Celtic mythology. Akhtya’s ghost-like soundscapes and multilayered vocal invocations guide the listener into the waves of haunting black metal. Each song is a specific journey in which the dark gods behold processions of those bearing skull-cups filled with the blood of the living.

The energy BLACK FUNERAL shaped and created in this recording is that of the Celtic forms of the Reaper, most intriguing being the Ankou. The Ankou is a grim harvester of the dead and collector of souls, found in the folklore of Brittany. The Ankou appears in many guises: from a thin, skeletal man with long white hair and a wide-brimmed hat, or as skeleton covered in a white shroud, carrying either a scythe or sword as he walks down the lanes with his carrion cart of death. The Ankou is said to be Cain, who is the patron witch-father of the Luciferian tradition of Witchcraft. This album manifests numerous forms of the Ankou and the Dullahan and the energies associated with their death magick.

IRON BONEHEAD will be handling the vinyl LP and digipack CD pressings while DARK ADVERSARY will handle the regular CD edition. Close your eyes, listen, and fall deep into the Netherworld and the inspirations of the Ankou and Morrigan.