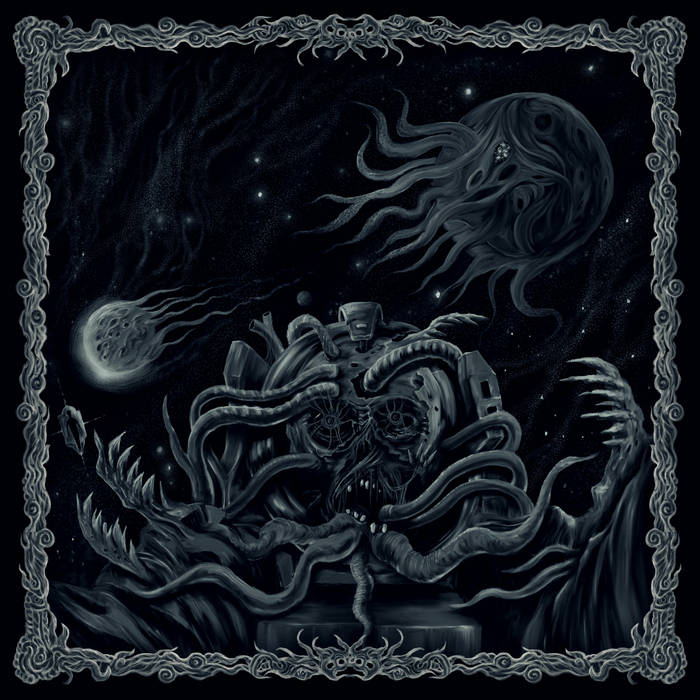 The sole work of one Unknown Entity, in its short lifespan, COSMIC VOID RITUAL has already released three demos, each one as provocatively titled as the next - Gateways Through Septic Flesh, Transcendence Through Galactic Death, and the IRON BONEHEAD-released Vitriol Tablet Instructions: Rehearsing Speeches For When You Die - as well as a split with Mark Riddick's Fetid Zombie, most recently. Across all those works was a decidedly bizarre yet resolutely raw form of death metal, harkening to short-lived cults of the '90s yet exhibiting a totally terrifying identity all its own. Alas, all coalesces into COSMIC VOID RITUAL's Grotesque Infections of Planetary Divide.

Once again, Unknown Entity has exercised keen judgment in titling this work Grotesque Infections of Interplanetary Divide: its four songs are indeed grotesque, and most certainly do they impart a cosmic aspect that's as primordial as it is post-futuristic. Utterly raw and rotten, here COSMIC VOID RITUAL shapeshift all sorts of vulgar shapes, its death metal filth turned inside out as tendrils of lurking dread encase the listener in a cocoon of nameless horror. Just like its evocative cover art, Grotesque Infections of Interplanetary Divide resides within a monochromaticism that's paradoxically visual; the ceaselessly slipstreaming sturm und klang of it all imparts a madness that's seemingly random, but comes into clearer focus the deeper one drowns within the cavern of said cocoon. The question, then, is not simply whether you will eventually emerge but, rather, how.

"Intestinal Rituals," "Interplanetary Seeds," "Cataclysmic Brutality," and especially "Charred Asteroid Fields": these are the four Grotesque Infections of Interplanetary Divide that COSMIC VOID RITUAL conjures. How will YOU emerge?