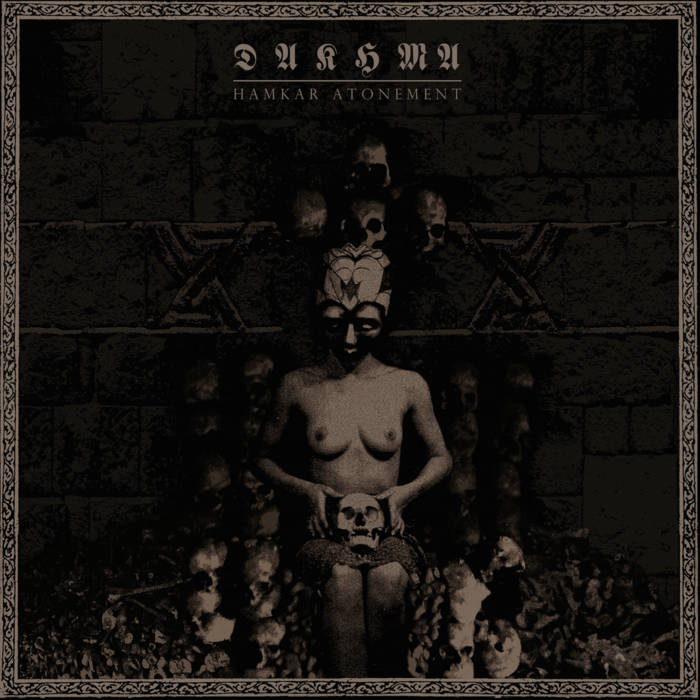 Matthew Toye Dakhma are in a league of their own. This is just a mind boggling journey through the mind, as well as the soul. It's a tad bit long and isn't meant as a casual listen, but it is ultimately unique and rewarding. Favorite track: Akhoman (Spill The Blood).

Кронштадт__Коммандо Dakhma have delivered a truly atmospheric, haunting, riff heavy, black/death metal release. Aided by better production, we can finally hear the power behind the walls of ambience that have been the focal point of previous releases. Although this release is long and dense, I think it's a crushing debut album and I'm looking forward to more from them. Favorite track: Akhoman (Spill The Blood).

A work of towering immensity, of unorthodox ritualism and subverted bestiality, Hamkar Atonement furthers the sonic defiance DAKHMA last suggested on the preceding Astiwihad-Zohr mini-album, released to critical acclaim in early 2016 by IRON BONEHEAD. There, the duo detailed a spiritual descent/ascent across four staggering songs spanning 27 minutes. Here, on Hamkar Atonement, DAKHMA descend/ascend even deeper/higher, with seven hymns within a staggering 61 minutes: total sensory overload, immersion that begets annihilation that begets rebirth. Within a somewhat-familiar template of bestial black metal, the duo proceed to mangle and malform every malodorous nook and cranny within the idiom, stretching it past its capacity and into high art - no less hysteric and feral, that is. In fact, the results are far more frightening, and demand far more of the listener; those of intrepid constitution shall be rewarded with sub-vibrational hypnosis and possession, the very essence (and near-subversion) of ritualism. Hamkar Atonement is truly a journey, the very definition of Album Experience, and once again, the very music of death.

As DAKHMA explains of the title, the Avestan word "Hamkar," which literally translates to "co-worker" or "helper," is used in reference to the daeva of Angra Mainyu (in middle Persian: Ahriman), himself the omnimalevolent and most destructive spirit. In the collection of texts describing Zoroastrian cosmogony and creation, traditionally called Bundahishn, Angra Mainyu creates a horde of daeva to counter the creation of cosmos by Ahura Mazda (in middle Persian: Ohrmazd or Ormuzd), with each daeva mirroring an opposite Amesha Spenta (lit. "immortal (which is) holy"; a class of divine and immortal holy entities who serve Ohrmazd). In mirroring the tasks of the Amesha Spentas as servants of Ohrmazd, daeva are the instrument through which Ahriman creates all the horrors in the world. Following the interpretation laid out in texts such as the "Shayest ne shayest," where the daeva are seen as being utterly real and not mere philosophical representations, the music contained on Hamkar Atonement describes creation through the ultimate destruction of Ohrmazd’s good deeds, good thoughts, and good work by the daeva. Hamkar Atonement begins with the demise of Ohrmazd and therefore the destruction of all that is holy on the earth, allowing the daeva to roam free and corrupt human existence, described in greater detail throughout the album. Each song serves a specific narrative purpose, be it the dedication to a specific daeva or describing the results of their exploits on earth. What follows is a musical journey through the horror and corruption brought forth by the daeva, until a black sea of dread washes over the earth and extinguishes the last holy flame, leaving only death triumphant, the great prophet.

Dare to submerge thyself within the daeva's very depths? Then let DAKHMA offer you Hamkar Atonement.