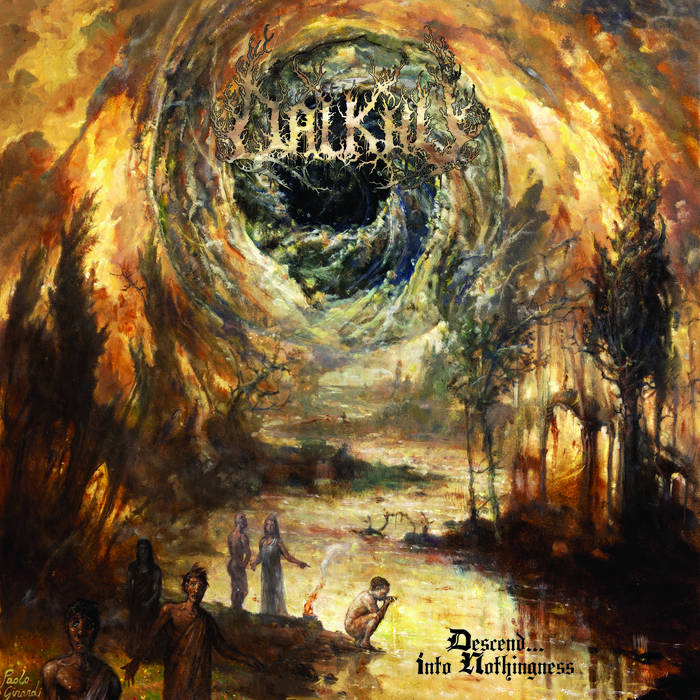 Yet again, IRON BONEHEAD PRODUCTIONS proudly presents one of the metal underground's best-kept secrets: DALKHU and a vinyl version of their second album, Descend... into Nothingness. Hailing from Slovenia, DALKHU began in 2003 and, to date, have released a demo and debut album, 2010's Imperator. The many years between releases have paid dividends, as Descend... into Nothingness is a patient, delayed-gratification record whose treasures might not be immediately apparent but are all the richer. Now stripped back to the duo of guitarist Jure and vocalist Primož, DALKHU dive deeply into the singlemindedness needed for such an epic, endlessly winding brand of black/death metal. Safely eluding easy categorization at either end of the spectrum, Descend... into Nothingness maintains the cold, nightsky aura of classic black metal while being buttressed by the exemplary chops and meticulous muscle of modern death metal. Parallels could be drawn to Eastern European cults like Hate Forest, Blood of Kingu, and Astrofaes, but DALKHU stand alone, unmindful of everything but the maelstrom they create. Recorded at Nightside Studio and mastered at Necromorbus Studio by Tore Stjerna, Descend... into Nothingness is completed by cover art courtesy of the masterful Paolo Girardi.