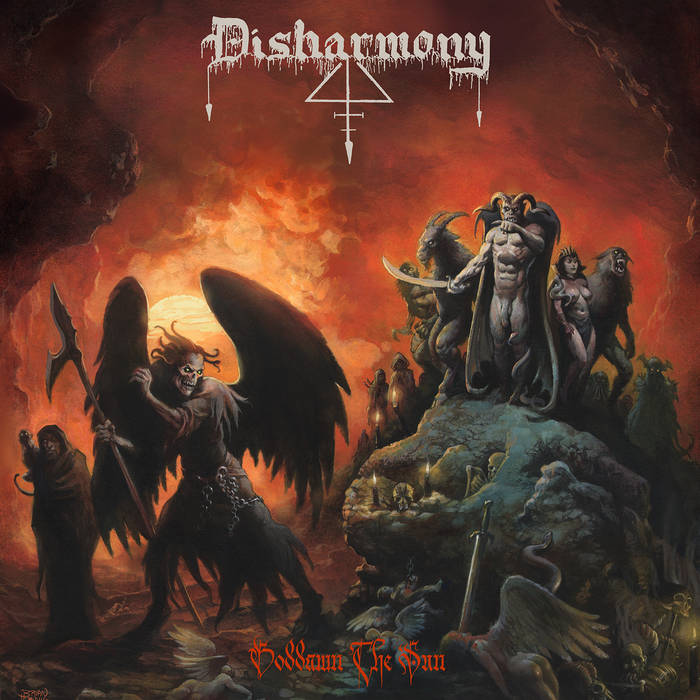 Andy O))) They put the reek in Greek Black Metal, and have perfected that early Rotting Christ sound. Favorite track: The Gates Of Elthon.

Matthew Toye For some strange reason there wasn't much Greek black metal in my collection until this. Disharmony really caught my attention. They fight well in the Old Style, but also break away from it to create something fresh. Favorite track: Elochim.

Hallowed be Thy Tunes

IRON BONEHEAD PRODUCTIONS is proud to present the LONG-awaited debut album of Greece's DISHARMONY, Goddamn the Sun. DISHARMONY are an often-overlooked entry in the history of Greek black metal. Formed in 1991 but broken up by '95, the band would record three demos and a cult EP on the legendary Molon Lave label. Although DISHARMONY's sound early on slotted well into the classic Hellenic BM paradigm - militant pulse, mystical atmosphere, deep roots in traditional metal - they largely took a more unorthodox approach, touching upon Beheritian weirdness and ritualistic soundscaping, but always with a thoroughly occult aura. Longtime fans of the band, IRON BONEHEAD collected DISHARMONY's old discography together under the title Vade Retro Satana and released it on CD and double-LP formats in 2016, reintroducing the band to old fans as well as younger generations.

But, now 2017 dawns and DISHARMONY have been resurrected, and their long-promised debut album has arrived in the form of Goddamn the Sun. Immediately, it is clear that this is a work of ancient Hellenic darkness; those immediately recognizable fundaments are firmly in place, and it is literally like a blast from the past - specifically for pioneering Greek black metal, the watershed year of 1993. And yet, so many years and a couple decades later, there is a new and strikingly refreshing sense of refinement to DISHARMONY on Goddamn the Sun. Long gone the unorthodox accoutrements may be, but what takes their stead is a stout 'n' surging iteration of Hellenic classicism, triumphant and otherworldly in equal measure, and still emitting a sulfurous sensation of aeons-old occultism. Even the cover art to Goddamn the Sun itself suggests an eldritch era, sometimes forgotten but never fully dead. And finally, seemingly a lifetime in the making, DISHARMONY have stepped forward to ascend the throne of this rich, timeless pantheon.