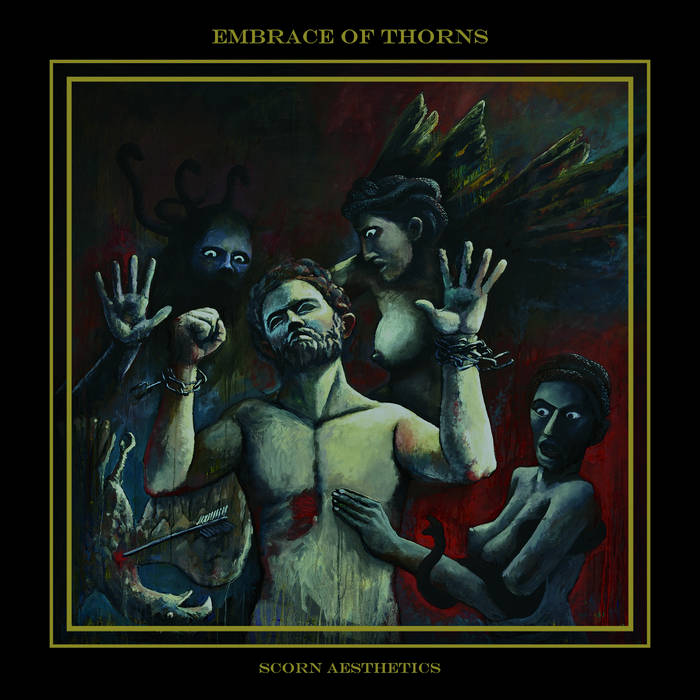 Matthew Toye Embrace Of Thorns are truly an enigma. They write with death metal's strength, and use black metal's mystique. Their music is neither genre, as the band continues their staunch pledge to the darkness. Favorite track: In Our Image, After Our Likeness.

For nearly 20 years now, EMBRACE OF THORNS have built a prolific-yet-patient catalog that defies easy categorization. Deeply rooted in ancient black metal and death metal to be sure, these Greek iconoclasts' sound nevertheless has often been "too black metal" for most death metallers and "too death metal" for most black metallers - likewise, they preempted the bestial metal by at least four years, and later on solidified songwriting finesse far "too clean" for most bestial worshipers - and sadly, wider acclaim in the underground has eluded them. For those KNOW, though, the name EMBRACE OF THORNS has come to mean a gold standard in black/death METAL, and while "acclaim" has never been in their lexicon, longtime supporters IRON BONEHEAD welcomes the band with the riveting Scorn Aesthetics.

Whereas earlier EMBRACE OF THORNS recordings - particularly their cult earliest albums, 2007's ...for I See Death in Their Eyes... and 2009's classic Atonement Ritual - melded the swarming, gibbering chaos of bestial black metal with the molten muscle of the most sepulchral death metal, with 2014's largely overlooked Darkness Impenetrable did the band cross a Rubicon, of sorts, into more streamlined and martial territory. It's a move that might've alienated the more underground-dwelling of EMBRACE OF THORNS' potential fanbase, but one that made their name ever more unique, and they continue that upward/onward trajectory with Scorn Aesthetics.

Encased in their most powerful and punishing production to date, which amplifies the band's growing clarity without sacrificing an ounce of grit, Scorn Aesthetics sees EMBRACE OF THORNS firing on all cylinders...and then crushing them underfoot. Across the album's generous-yet-concise 43 minutes, each of these seven tracks builds with patience and poise, but somehow elusively convey a sense of explosion, detonation, immolation. The effect is one of vortextural churn 'n' spun, slipstreaming the listener into a roiling, ceaselessly humid mass but offering no hope nor reprieve. More generally, Scorn Aesthetics is built upon walls of RIFFS - be they "death metal," "black metal," or just pure METAL - all coalescing into an occult fury, immediately engaging every step of the way and memorable to the very end.

Iron-willed and resolute, EMBRACE OF THORNS challenge convention and stagnation with Scorn Aesthetics. Prepare to be flattened, or step aside like a coward.