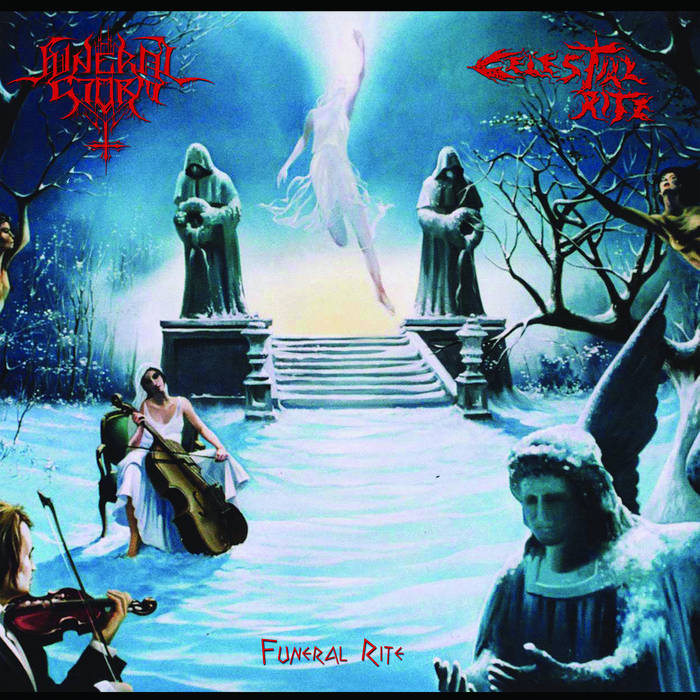 IRON BONEHEAD PRODUCTIONS is proud to present Funeral Rite, a split mini-album between FUNERAL STORM and CELESTIAL RITE, on both CD and 12" vinyl formats. Although IRON BONEHEAD is largely known/infamous for the scuzzier, filthier end of extreme metal, long has its heart pumped to the beat of classic Greek black metal. Just in recent years, the label has released KAWIR's long-awaited comeback album alongside celebrated EPs by ancient-minded newcomers ITHAQUA, not to mention a long-overdue collection from DISHARMONY among others, and with Funeral Rite, IRON BONEHEAD once again hails the banner of Greek black metal classicism.

Kicking off Funeral Rite on Side A are FUNERAL STORM. Although brewing for the better part of the past 15 years, FUNERAL STORM's discography to date has been sparse but of uniformly high quality. Listening to the two tracks they contribute here is like being whisked away to 1994/1995, when Greek black metal's foremost pioneers - Rotting Christ, Varathron, Necromantia, Septic Flesh, and Nightfall - were all starting to spread their wings creatively and deliver triumphant, otherworldly art. Underlining those ancient ties are exclusive vocals by Varathron's Necroabyssious. The two tracks that CELESTIAL RITE contribute here, sadly, are the band's epitaph - but what a glorious epitaph they leave. Comparably aligned with FUNERAL STORM in their deeply seated, deeply studied iteration of classic Greek black metal - pulsing, mystical, muscular, dusky - CELESTIAL RITE weave a more occult fabric with Funeral Rite, and one shot through with a sort of melancholy, perhaps suggestive of the band's final days.

Together, the past is indeed alive with Funeral Rite!