House Of Atreus - From the Madness of Ixion 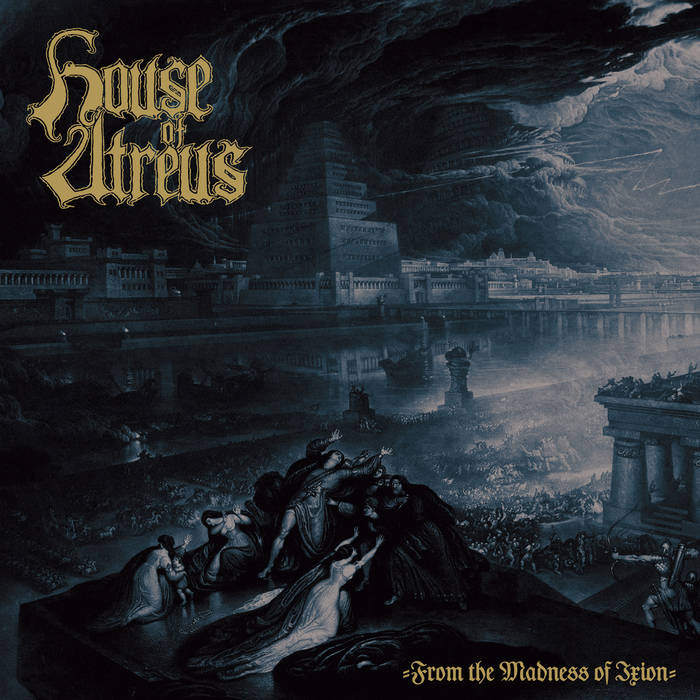 Matthew Toye House Of Atreus have an uncanny knack for death metal. They transition from brutal to melodic with neck snapping accuracy. But what sets them apart is those absolutely glorious guitar solos. Favorite track: Oath of the Horatii.

IRON BONEHEAD PRODUCTIONS is proud to present HOUSE OF ATREUS' highly anticipated second album, From the Madness of Ixion, on CD and vinyl LP formats.

One of the most singular hordes to hail from North American soil lo the last decade, HOUSE OF ATREUS have patiently and painstakingly crafted death metal of a most epic order. A veritable riff-machine, this Minneapolis-based quartet are powered by the Greek tragedies and have that very same tragedy (as well as triumph) coursing through their rough 'n' rugged veins. Theirs is a sound unapologetically influenced by the ancient Hellenic legends Varathron and Rotting Christ as well as other singular riff-machines like Grand Belial's Key and Arghoslent, and the earliest and most blackened works of Running Wild. However, HOUSE OF ATREUS handily transcend these influences, and as evidenced by their critically acclaimed debut album, The Spear and the Ichor That Follows, they've managed to add to this glorious lineage rather than merely bottom-feed off it.

Alas, three years later, HOUSE OF ATREUS return with a full-length that transcends the heights of their debut album. Provocatively titled From the Madness of Ixion, here HOUSE OF ATREUS go from strength to strength, flexing all the same muscles that made The Spear and the Ichor That Follows so memorable whilst subtly expanding their vivid 'n' violent palette. Fluid and flowing riffery, bottom-end heft heaving the thrust forward, grace meeting grime at every turn: truly, From the Madness of Ixion soon becomes a veritable labyrinth of epic death metal majesty. And yet, with founding bassist Anxietous Nero's remarkably articulated vocals at the fore, the album's impressively/imposingly labyrinthine flow somehow worms its way into the listener's subconscious, weaving a memorability impossibly at odds with its wending 'n' winding ways - and yet, just like its predecessor, IT WORKS.

Magick in the purest sense of the word, then, HOUSE OF ATREUS indeed ensorcel all who dare to enter From the Madness of Ixion. Thus, how will you emerge: tragic, or triumphantly?