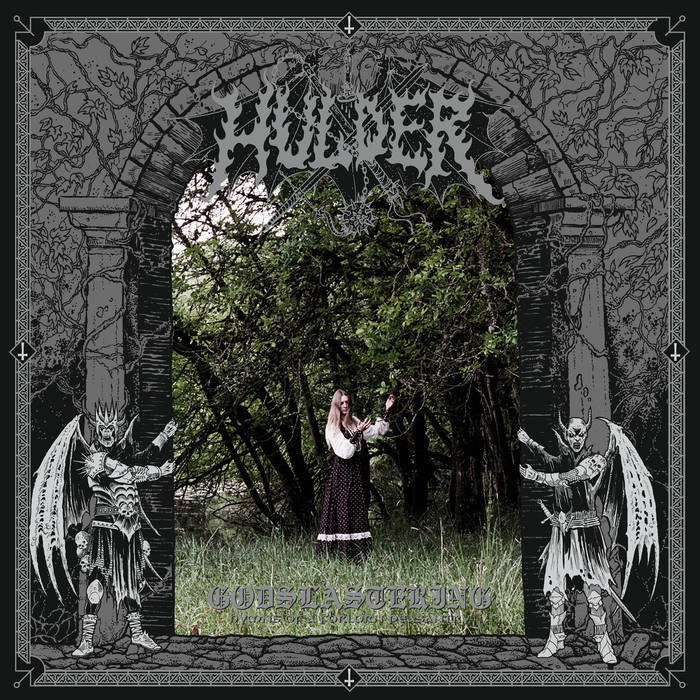 The Mad Professor True Black Metal. Hulder brings a solid fucking album of perfectly executed and mastered riffs, with vocals spitting venom and bile like the glory days gone by

poisonoracle CD Purchased. Always happy to pay a little for the digital also to support the artist. Hails.

F. One of the most anticipated releases in a long time and it was absolutely worth the wait. Amazing, all killer no filler record. Favorite track: A Forlorn Peasant's Hymn.

Richard Barchanowicz Black metal mastery at its finest. What a flawless album..Hail!!

One of the black metal underground's best-kept secrets, HULDER formed in 2018 as the sole work of the selfsame Hulder. A native of Belgium but currently residing in the United States, she quickly went to work on HULDER's first demo, Ascending the Raven Stone, released during the summer of 2018. Ancient and regressive but with no shortage of technicality, Ascending the Raven Stone set forth a rigorous discipline that Hulder would expound upon with the more dungeoned Rehearsal 8/13/18.

Word began to build about the band, and successive tape editions as well as the De oproeping van middeleeuwse duisternis compilation a year later ensured HULDER's momentum was worth reckoning. Arguably, it was the release of the Embraced by Darkened Mysts EP where Hulder crystalized her aesthetic, both in sheer sonics as well as visuals: full-color cover art featured her in medieval warrior regalia surrounded by a dense forest - classically black metal in its composition, sword included - neither emphasizing her femininity nor denying it. Along the way, HULDER piqued the ears of IRON BONEHEAD, who first released De oproeping van middeleeuwse duisternis on vinyl and then collected that as well as the two demos onto digipack CD.

Now aligned with IRON BONEHEAD, HULDER make their boldest statement yet: Godslastering Hymns of a Forlorn Peasantry, the band's full-length debut. Just like debut albums properly should, Godslastering Hymns of a Forlorn Peasantry straddles both HULDER's past as well as unearthing new paths. Within the eight songs comprising the 40-minute record, Hulder spans myriad generations and idioms of black metal, but all deeply rooted in '90s classicism: from the paganisms of earliest Enslaved, Ulver, Isvind, and Kampfar to the hypnotizing grit of classic Judas Iscariot and Grand Belial's Key, on to the mystical majesty of unsung Greeks like Zemial and Kawir and even over to the woodland wonder of old Opera IX. Which is all to say that HULDER here not so much mimic their forebears so much as meld the idiosyncrasies inherent to each into a masterclass in all-caps BLACK METAL songwriting: dynamic, engaging, nuanced, and transportive, but undeniably physical in its pulsing vistas of darkness and mystery. Likewise, Godslastering Hymns of a Forlorn Peasantry is structured like a true album, with Side 1 kicking in an utterly feral manner and cresting along to vicious wanderlust and ending on the eerily restrained near-ambient hymn "De Dijle," and then Side 2 furthering the synth mysticism and maintaining a more triumphant aspect, with the closing magickal march of "From Whence an Ancient Evil Once Reigned" sounding not unlike a lost relic from Grieghallen circa 1994. And all this is encased in a production that's rich, robust, and rounded; only the rawness of the performances bleed into the soundfield, a clear division from HULDER's earlier demo days.

The past is alive because the present is dead. With the glorious birth of Godslastering Hymns of a Forlorn Peasantry, long live HULDER!