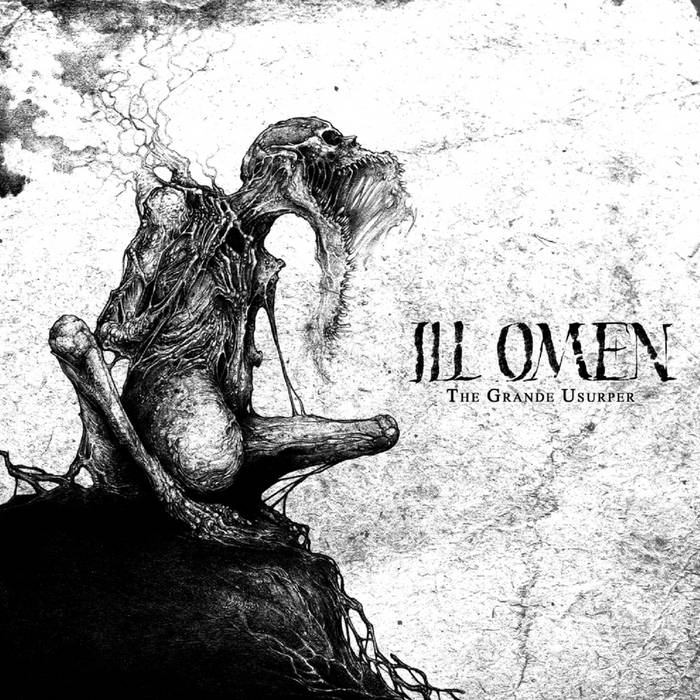 IRON BONEHEAD PRODUCTIONS is proud to present a special mini-album from ILL OMEN, The Grande Usurper, on CD and 12" vinyl formats.

A prolific force within the Australian black metal underground, ILL OMEN has built a canon of enviably massive proportions - and not just "massive" in size, but rather in the heights/depths to which mainman IV aims. Much like he has in his death metal-oriented vehicle TEMPLE NIGHTSIDE, IV scours the murk with single-minded intent, but with ILL OMEN, he pursues a vision of black metal that's ceremonial and sinuous, often slowly drifting like fog lingering across an empty grave. Such was the case with 2016's massive Æ.Thy.Rift - arguably, IV's perfection of slo-mo blackdoom - and here, he returns with his first recording since that critically acclaimed third album.

And yet, The Grande Usurper is a grand break from the gooey, stretched-out expanses of Æ.Thy.Rift. No less murky, instead, IV sends the listener on a wild ride through the most bestial recesses of the characteristic ILL OMEN sound. Across its four-song/25-minute runtime, The Grande Usurper roils and revels among the filth, pulsing with barely contained rage, as mind-melting solos yawn slowly up from the crypt, invoking that same sense of delirium as Æ.Thy.Rift but faster. Altogether, it's a record that consolidates all the gnarled 'n' gnarling weapons within the ILL OMEN arsenal, but wields them in obscene and horrifyingly new ways. Hideous energy, slipstreaming songwriting, coffin-bound atmosphere crushed: here is revealed The Grande Usurper.