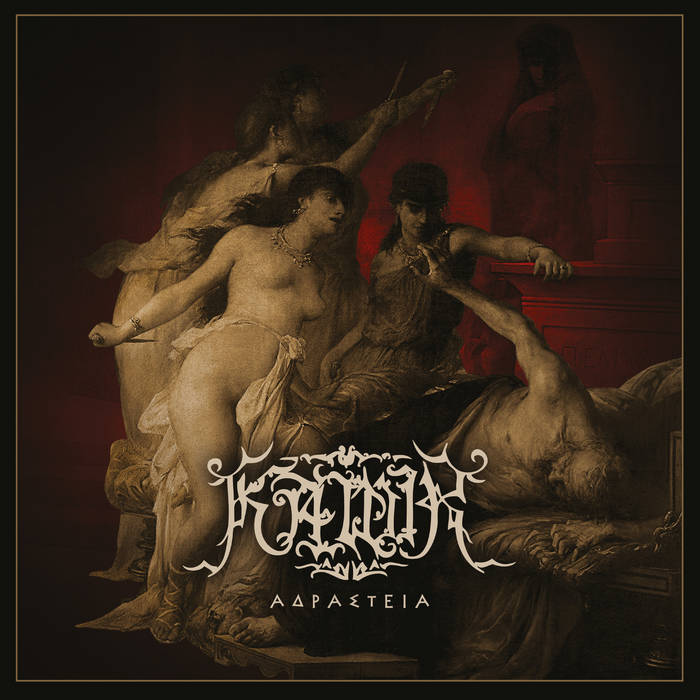 DJ Dissident My favourite of theirs by far. Beautiful and perfect ❤ Favorite track: Medea.

RJ A heavy, melodic, bang your head, all gas, no breaks kind of album. Kawir do a great job blending blackened death metal with more folk-like passages of acoustic guitar and a hymn-like choir. A very solid listen front to back. The only minor criticism I have is that the production could be better as it feels a little flat. 7/10 Favorite track: Medea.

For over 25 years now, KAWIR have been one of the unsung pillars of the classic Greek black metal sound. While the names Rotting Christ, Varathron, and Necromantia are incredibly important to that style's foundation, it was KAWIR who kept the faith during the '90s and into the new millennium. In 1994, the then-young band released two pivotal 7"s, Eumenides and a split with Japan's Sigh - on the pivotal Cacophonous Records, no less - and then followed those up in 1996 with the To Cavirs MLP, which is the first truly pagan-oriented record to hail from the Greek black metal scene. With that mini-album, KAWIR set about on a Hellenistic crusade to celebrate their native gods and mythology in their lyrics and sartorial presentation. From the late '90s onward, the band continued to remain prolific, perpetually committed to fine-tuning their idiosyncratic craft, culminating in underground classics Arai (2005) and Ophiolatreia (2008). Although 2012's Ισόθεος featured a cross-continental lineup, the album further solidified KAWIR's status as unique icons in the black metal underground.

Come 2016, however, KAWIR aligned with longtime fans IRON BONEHEAD and released their first album through the label, the massively acclaimed Father Sun Mother Moon. That album saw KAWIR return to an all-Greek lineup and recast their classic sound in a whole new light, and continued that forward momentum the next year with the fiery Exilasmos. If the 64-minute Father Sun Mother Moon was the sound of KAWIR indulging their most epic expanses - always with power and poignancy, it must be said - then the 42-minute Exilasmos was its punchier and more restless counterpart. Taken together, both these albums for IRON BONEHEAD formed an exciting new chapter in the ongoing KAWIR saga, and suitably saw the band reach a whole new generation of fans, their fire seemingly inexhaustible and a veritable fountain of youth.

Perhaps not surprisingly, that fountain overfloweth with KAWIR's eighth album, Adrasteia. Although three years separate this and its full-length predecessor, Adrasteia amazingly brims with an urgency that's simply startling for a band of such veteran status. Upon its first few resounding notes, Adrasteia is immediately and engagingly KAWIR - and as the ceremonial slow-burn of opening track "Tydeus" builds, anticipation is set exceedingly high, these Greeks working a simmering spell of sumptuous splendor. The track segues into a heroic march by its latter third, with that ever-so-enticing Hellenic mysticism taking root, before the fury fully begins with the following "Atalanti." Indeed, that fury doesn't relent for the remainder of Adrasteia, but KAWIR carefully keep their pacing nuanced and dynamic, with each of these six characteristically cascading tracks unveiling a breathtaking landscape of sonic peaks and valleys.

But, as ever with KAWIR, the sonic portrait they paint is imbued with a deep lyricism hailing the Greek pantheon. In the case of Adrasteia, its namesake is the goddess of female revenge, and honorably does the album's lyrical concept focus on heroic women and the cruelty around them. For this unique and tasteful exploration, KAWIR here have gathered together a whole host of incredible guests, including Macabre Omen mainman Alexandros on all clean vocals, the ethereal Norwegian voice of Lindy-Fay Hella on the stark 'n' haunting "Colchis," and Melechesh's Ashmedi giving a guitar solo on "Danaides."

Altogether, Adrasteia makes for KAWIR's most quintessentially Greek album in many years - ever longer may their pantheon reign!