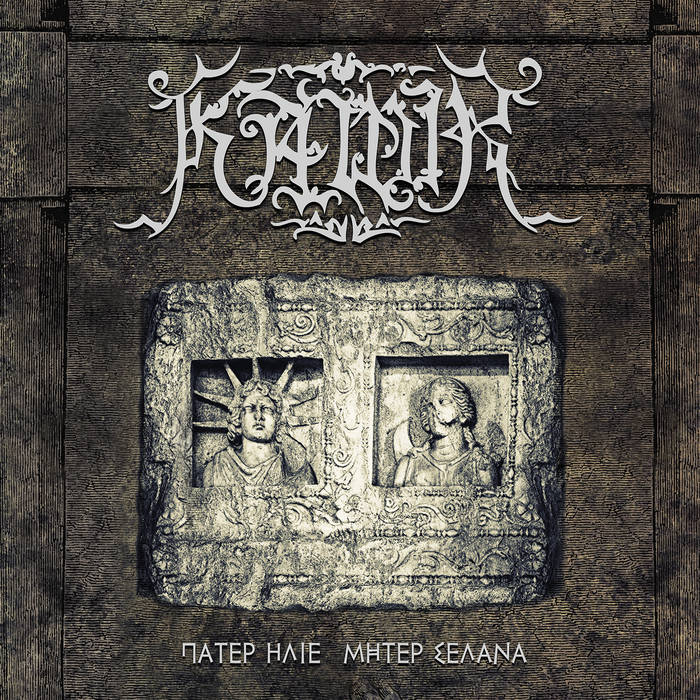 Middle Earth This is nothing but fantastic Black Metal. Recommended. Favorite track: To Diouscuri.

Mad Medico An amazing achievement for one of Greece's premier black metal bands. If you are a fan of Macabre Omen you have no excuse for missing out on this Favorite track: Dionysus.

Stuart Leeds An unusual yet great blend of black metal with folk instruments thrown in. Ideal for a ritual ceremony to the olde Greek gods and goddesses!

IRON BONEHEAD PRODUCTIONS is proud to present the long-awaited new album of legendary Greek black metallers KAWIR, Father Sun Mother Moon. Since 1993, KAWIR have been one of the unsung pillars of the classic Greek black metal sound. While the names Rotting Christ, Varathron, and Necromantia are incredibly important to that style's foundation, it was KAWIR who kept the faith during the '90s and into the new millennium. In 1994, the then-young band released two pivotal 7"s, Eumenides and a split with Japan's Sigh - on the pivotal Cacophonous Records, no less - and then followed those up in 1996 with the To Cavirs MLP, which is the first truly pagan-oriented record to hail from the Greek black metal scene. With that mini-album, KAWIR set about on a Hellenistic crusade to celebrate their native gods and mythology in their lyrics and sartorial presentation. From the late '90s onward, the band continued to remain prolific, perpetually committed to fine-tuning their idiosyncratic craft, culminating in underground classics Arai (2005) and Ophiolatreia (2008). Although 2012's Ισόθεος featured a cross-continental lineup, the album further solidified KAWIR's status as unique icons in the black metal underground. Alas, with the highly anticipated Father Sun Mother Moon, KAWIR return to an all-Greek lineup and recast their classic sound in a whole new light.

In many ways, Father Sun Mother Moon is a record that could've hailed from the early days of KAWIR's pagan transition. A mysticism from ancient times blankets these hymns to the Hellenic Pantheon, made all the more stirring by being delivered in actual Ancient Greek Language. The incorporation of ethic instruments and atmospheres lends Father Sun Mother Moon not only an authenticity that is extremely difficult to replicate, but a very literally otherworldly aura that brims with the triumph and tragedy, enlightenment and bloodlust, of Greece's ancient mythological canon. In fact, the album was recorded nine kilometers away from the legendary Thermopylae. "We tried to catch the original epic vibe that surrounds the ancient lands," says founding guitarist Therthonax. Indeed, with recording, mixing, and mastering taking place at Locomotive Studio during October through December of 2015 (with acoustic parts and vocals recorded at Dope of Sound), the totality of this experience is stirred into every note of the album, as the past is brought to the present - and all the more so with the return of vocalist Porphyrion, whose throaty rasp help make Ophiolatreia such a beloved album among KAWIR fans new and old.

But the reflection vs. refraction connection doesn't just end there. The cascading aggression brought forth on Ophiolatreia and then amplified even further on Ισόθεος is rejuvenated once more on Father Sun Mother Moon. And yet, without losing an ounce of their windswept power, KAWIR season this surge with subtle nuance and keen shifts of dynamics, verily making each of these eight tracks an epic in their own respective right. Altogether, the album encompasses the passion and poignancy for which KAWIR have made their stock in trade for over 20 years now. That it brings everything "full circle," as it were, is far from coincidental, too. "The title Father Sun Mother Moon symbolizes the circle of life," Therthonax explains, "a return to the ancient days when we were celebrating the male Sun deities at the longest nights of the year - the Winter Solstice - and female Moon deities at the longest days of the year - the Summer Solstice - at the full moons and at nights when the silver light wasn't visible. The two opposite edges of the cosmic pendulum of equilibrium where the eternal forces, although in constant battle, coexist and where, in their ever-changing balance, the world is manifested - the same world where we find ourselves in. For the life-giving principles of light and darkness, for the male and female forces that surround us, all honors due!"