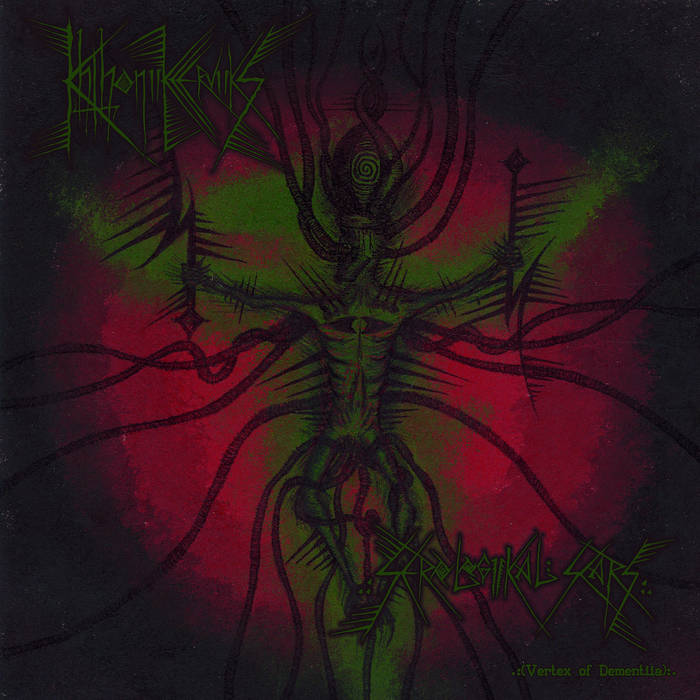 Morbid Cannibal Angel Corpse a memorizing blend of black death. it gets in your system like a virus,. the only cure is a second listen. Favorite track: Biinary Epitome (Spyder’s Web).

Atanamar Sunyata A gem of extreme artifice. Pleasing, perplexing death-black oddity. Voivod vaulting The Chasm, or Atheist genuflecting in the Chapel of Ghouls. Elastic and intricate. Loosely woven, elusive threads bound by a knot of riffs most mighty. Much more compelling than their demo; a tall order.
www.mindfulofmetal.com

TheBoxx A perfect miiks of black/death metal that will relentlessly drive its hooks into your brain. Come for the demented yet entrancing musiik; stay because there is no escape from this miindwarp. Favorite track: Cranial Leftoverture (Angel’s Pyramiid).

pissin in your elevator

IRON BONEHEAD PRODUCTIONS is proud to present the vinyl edition of KHTHONIIK CERVIIKS' highly anticipated debut album, SeroLogiikal Scars (Vertex of Dementiia). Just last year, IRON BONEHEAD released the German power-trio's Heptaedrone demo on both cassette and vinyl, and slowly yet surely, KHTHONIIK CERVIIKS' malevolent, miasmic metal magick worked its spell on the underground. Violent, dangerous, and more than a bit chaotic, yet exhibiting startling poise and dynamics otherwise unattainable for black/death metal so gnarled and gnarling, Heptaedrone was sonically as singular as the band's moniker and its song titles equally odd and unsettling. But now, with SeroLogiikal Scars (Vertex of Dementiia), KHTHONIIK CERVIIKS erase the slate and lay down a debut LP for the ages.

Immediately, the band's growth since their last demo is palpable. While recognizably KHTHONIIK CERVIIKS, the alternately swinging/marching mantra that tensely opens the album bespeaks a confidence and maturity that often takes years to harvest, if it does at all; from there, the vortex opens wider until a windswept rush ushers in your spiritual demise. The band's basis in the bestial arts is still very much intact here, but their barbarity has taken on new, even-more-twisted shapes, with textures daubed in alien strains of blood and madness narrowed down into an almost logical formula. Ever restless but ever in control, KHTHONIIK CERVIIKS shift gears as insanely as their hive mind moves, but have likewise harnessed the power of simmering tension, tectonic despite the daring increase in melodicism, making those vortexes more alluring but also more fatal. It's a payoff that shouldn't work, but it does - eerily, hypnotically, majestically - no doubt enabled by the suprisingly clear, concise production that sacrifices no amount of power nor punch.

Still, savage is their swirling maw - angular, ugly, unapologetic - and despite the unhinged violence across SeroLogiikal Scars (Vertex of Dementiia), KHTHONIIK CERVIIKS are aiming for spiritual/astral planes far beyond the mien of "metal." The album's lyrical concept, in the band's words, "is basically dealing with modern 'drawing board diseases' and external control over one's body and mind. Traces of a lot of common illnesses can be found within a person's blood serum, although this individual has never actively, or pathologically, suffered from such diseases. Thus, we contain within ourselves a lot of alien DNA, antibodies, and other material through vaccination and viral vectors. Schizophrenia and other mental diseases bring about detectable changes to our cerebral metabolism, as well. These serological scars, documenting mental and physical decline, are central to the album's lyrics. Both causality and naturalness of what we are forced to deem normal and acceptable are questioned here. Again, technology is the pivotal force behind it all and a means to an end. Electronic tentacles are driving our bodies and souls towards dependency and blight."

Just as the label has done with fostering the "thinking man's savagery" of Bölzer and Cult of Fire, IRON BONEHEAD will destroy souls and blow minds with KHTHONIIK CERVIIKS' SeroLogiikal Scars (Vertex of Dementiia).