Ritualization - Sacraments to the Sons of the Abyss 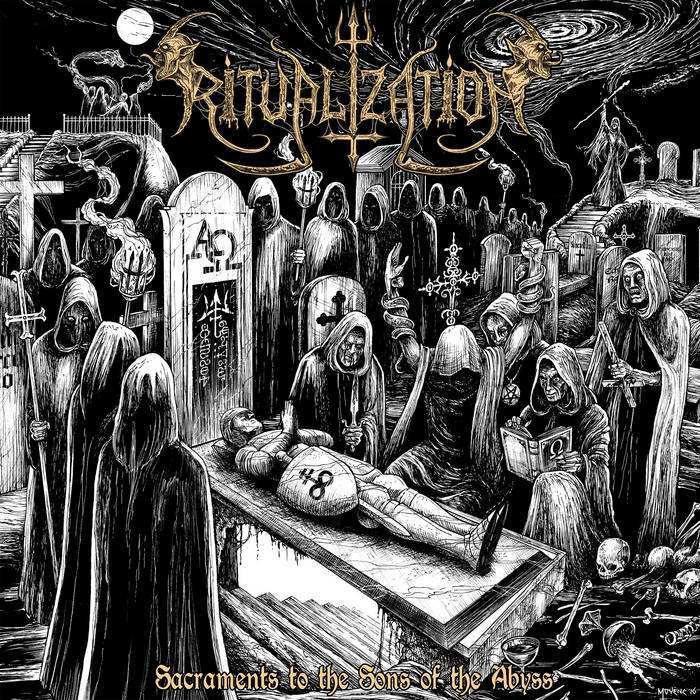 Stef Fantastic attention to detail with the vinyl release of this album, very glad that i own a copy.

Tom Areola I really enjoy it when a newer band can closely resemble one of the classics while still maintaining originality and their own image. You can clearly hear the influence of death metal legends like Morbid Angel and Angelcorpse on this record. This band pulls it off exceptionally well. Favorite track: Last Rites to the Damned.

Jose Garcia French Death/Black Metal... What more could you ask for?! Ever wonder what the soundtrack to your sacrificial ritual would be? It'll be this album. Favorite track: Heretics.

Matthew Toye Some bands just throw out a record every couple of years to make some cash. Not Ritualization. They took some time to hone their dark and chaotic sound. As a result you get some superb French death. Favorite track: Morbid Magick Stigmata.

IRON BONEHEAD PRODUCTIONS is proud to present RITUALIZATION's highly anticipated debut album, Sacraments to the Sons of the Abyss. Hailing from the now-fertile French death metal underground, RITUALIZATION have been patiently finetuning their fiery craft for a decade now. Although diehards are familiar with the band's name, RITUALIZATION strike upon the international scene with Sacraments to the Sons of the Abyss, a 10-track/44-minute firestorm of malicious and iron-fisted DEATH METAL.

RITUALIZATION are the gathering of four individuals who share the same ideas about the way death metal must be played. Manning the six six six wires of hatred, Infamist’s initial purpose was to bring another musical incarnation to the light of darkness. He began to jam with Blastum (warhammers) in late 2005 to early 2006 until Warchangel joined the fold in September 2006 to take care of vokill duties, soon followed by Krig (pulse of the dead + ghouls vomit). Four tracks were recorded in April 2007 in their ritual chamber; this rehearsal tape was meant to spread the name of the band.

In March 2008, RITUALIZATION performed their very first ritual in Colmar, France with fellow death metal maniacs Bloody Sign and Necros. Then the band recorded The Abduction Mass that spring. This tape contained four tracks of brutal and obscure death metal, plus a cover of the mighty Finnish gods Archgoat's "Black Messiah." This demo was unleashed through Blood Harvest's brother label Zombie Ritual Tapes, and it remains sold out to this day.

In 2009, RITUALIZATION focused on gigs and played in Lille (with Terminal War and Disgust), in Lyon (with Proclamation, Blasphemophagher, Vortex of End, and Deadly Sins), and finally Paris (with Vorkreist, Purge, and old comrades Bloody Sign). Meanwhile, the band still worked on new material in order to hit the studio the following year to record material for their upcoming releases.

An alliance was sealed with French black/death cult Temple of Baal to create a split album through Agonia Records. Titled The Vision of Fading Mankind and released in late November 2011, this critically acclaimed split introduced RITUALIZATION to their widest audience yet. Meanwhile, during summer 2011, Set enters the band as second guitarist to increase the audial impact and live aggression, performing his first live rituals at the Surrender to Death gig in Clermont Ferrand and the Ritual for the Dead in Berlin. Then, in 2013, a 7" EP entitled Beyond the Shrine of Shattered Bones is released through Blood Harvest Records.

Now, with Sacraments to the Sons of the Abyss, RITUALIZATION bring forth an unadulterated vision of death metal and a tribute to bestial legions such as Angelcorpse, Incantation, Archgoat, Immolation, Centurian/Nox, Ravager/Hacavitz, Naked Whipper, and many more minions of audial darkness. Channeling obscure death metal onstage and unleashing releases forged in the faithful tradition of what death metal must be - that is RITUALIZATION’s purpose.