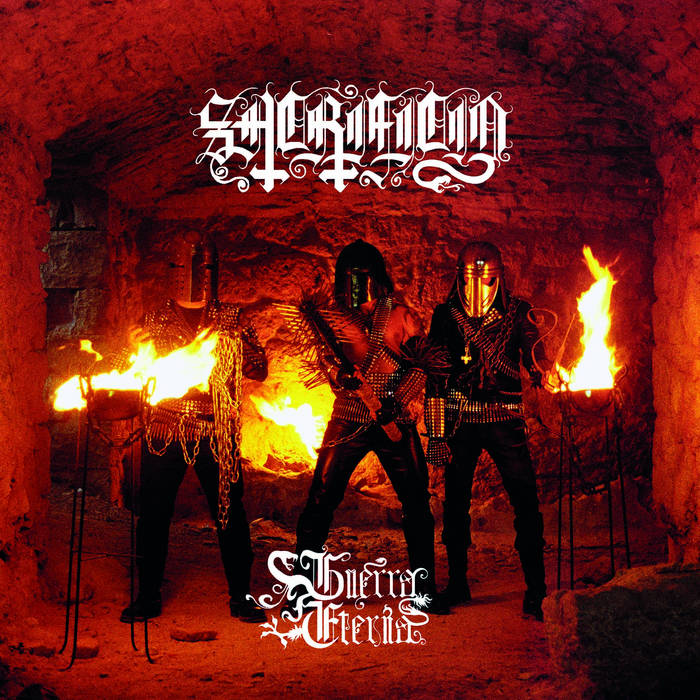 marlotov I am mad with this, if want a discharge of old and raw BlackMetal, this is for you Favorite track: Vástagos de la abominación.

Tom Areola This is some solid black metal with that classic sound bands from this area are known for having.

Matthew Toye I was hooked after listening to the first track and bought it immediately. That almost never happens. The production is warm and fuzzy. It's phenomenal black metal. Favorite track: La marca del hereje.

IRON BONEHEAD PRODUCTIONS, in conspiracy with NUCLEAR WAR NOW! PRODUCTIONS, is proud to present SACRIFICO's highly anticipated debut album, Guerra Eterna. Hailing from Spain, SACRIFICIO caused a stir in the underground with the release of their self-titled mini-album in 2014, which was also jointly released by IRON BONEHEAD and NUCLEAR WAR NOW! Chained in conservationism as a strict principle, the trio raised the banner of black metal's first generation and reinvigorated its standards with Sacrificio. But now, with Guerra Eterna, these true warriors of the occult have eclipsed that feat by creating a humid mass of idiosyncratic, eldritch energy: a soundfield/headspace fully unified, a statement of steely, blood-drenched intent.

Like its debut short-length predecessor, SACRIFICIO's Guerra Eterna bristles and brims with the same strange intensity that earmarked the most unexpected and darkest latitudes of Columbia, Brazil, Czechoslovakia, and Hungary in ancient times. Verily, it is BLACK METAL, vociferously and vigorously, without parentheticals or qualifiers or other weakening aspects of nowadays "black metal." And yet, throughout its staunch songwriting and more strident execution, Guerra Eterna finds SACRIFICIO in an advanced state of evolution, even if that "evolution" is inversely a sort of devolution, shackled as they are to the swirling scuzz that equally nods to the pioneering works of early deathrash legends and the contemporaneous bestiality of elder South American climes. Further, the production on the album is even more rounded and robust than the mini-album: as ever utilizing supposedly "arcane" methods of tube distortion and tape compression, it reveals aggression and mystery equally in a more pronounced manner.

Warriors summon to the bugle sound of death marches and bloodshed, intoning anthems of a timeless black metal apocalypse. Fierceness of colossal might unbounded, throughout barbarous aeons of atrocious warfare. Devastation and misery overrule for eternity. Only the dead will see the end of war...this is the sound of SACRIFICIO's Guerra Eterna.