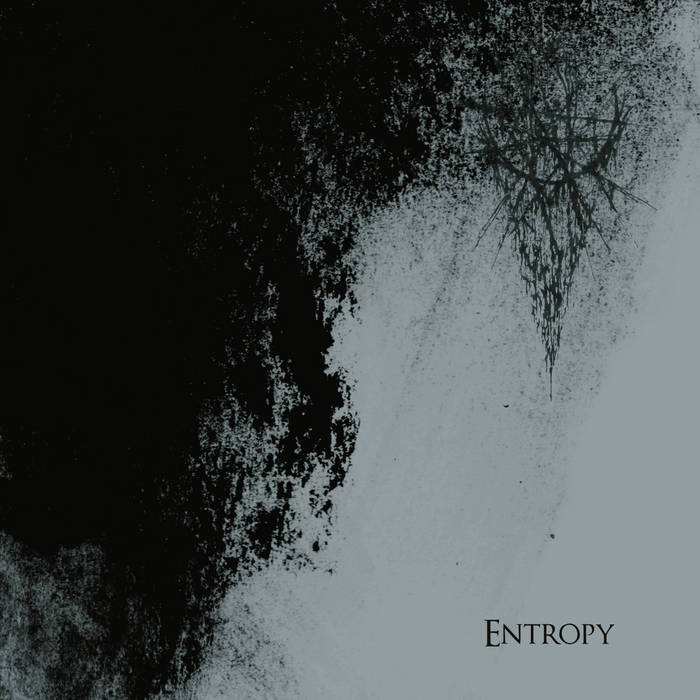 Ivory Tower This could be described as Blut Aus Nord done the right way. Anyone who appreciates the pursuit of introspection of BAN but thinks that its dissonant and "deconstructionist" take hinders from achieving the goal entirely, ending up in something too brainy, anyone sharing this view may receive this album as a more convincing and straightforward attempt in a similar direction.
Spire's Entropy expresses the Void, which unmakes self and cosmos, as a dimension of majesty and meditation.

Matthew Toye Spire are your guides through the darkness that they spread across this whole journey. Excellent ambient black metal. Favorite track: Void.

Tolujin Compelling from the get-go but also a major grower, with layers and layers of corroded guitars revealing themselves like cloud strata in the poisonous atmosphere of a dead planet. Or something. Highly recommended for fans of classic and ambient black metal alike. Favorite track: Entropy.

𝖙𝖜𝖎𝖘𝖙𝖊𝖉𝖘𝖔𝖓𝖔𝖋𝖜𝖆𝖙𝖘𝖔𝖓 This is one of the best produced black/death metal albums I have heard. Such clarity within the swarming mass of sound; equal parts horrific and haunting, with real cogency of form from track to track. Favorite track: Void.

FallenAngel No favorite track here, consume in its entirety.

IRON BONEHEAD PRODUCTIONS is proud to present Entropy, the highly anticipated debut album of Australia's SPIRE. Shrouded in a mystique as shadowy and ominous as their moniker, SPIRE have seen a slow 'n' steady evolution since their formation in 2007, releasing a self-titled EP in 2010 and then the murky 'n' majestic Metamorph EP in 2011. So enthralled by the fathomless expanses of the latter, IRON BONEHEAD saw fit to release Metamorph on 12" vinyl before the close of 2014. The stage was thus set for SPIRE's inevitable debut album...and at last, it arrives in Entropy.

Much as Metamorph was ever aptly titled, the title of Entropy portends much of its malignant, miasmic contents. Since their fortuitous beginnings, SPIRE's black metal is an obsidian tower both ascending and descending, to the heavens and the hells, an unbreakable/unshakable continuum of grim splendor ‘n’ despair. But whereas a lot of slow(er) black metal simply sounds like that - "slow" - the SPIRE sound carries a very patient, simmering aura, that continuum portending darker, more doomed things than the reigned-in pace suggests, that cyclonic violence is around the corner, lurking dread to be imminently invoked. And indeed it is invoked across Entropy, and often, as the spiraling ascent/descent is even more malaised 'n' hazed, the violence more threatening and dramatic, and the shifts between the two both sudden and subtle.

But unlike SPIRE's earlier work, the atmosphere of Entropy solely stems from both the songwriting and its execution rather than simply the sound itself. In fact, one could argue that Entropy is daresay "well produced" or at least more than a bit clear; its murk wholly arises from the record's contents and those players willing it into being. When the trend in modern underground metal is utter obfuscation - and often, when there's little to nothing of any value worth obscuring in the first place - SPIRE's clarity of expression is a daring move, and one suggestive of a band whose confidence and mastery have at last conjoined. One must only hear the closing, 14-minute title track to corroborate this fact.

Above all, Entropy is an album of stark contrasts - speed/sloth, density/space, tension/resolution - brought into frightening focus; it leaves everything and nothing to the listener. The gates have both opened and closed, and there stands the SPIRE, your Entropy all but guaranteed.