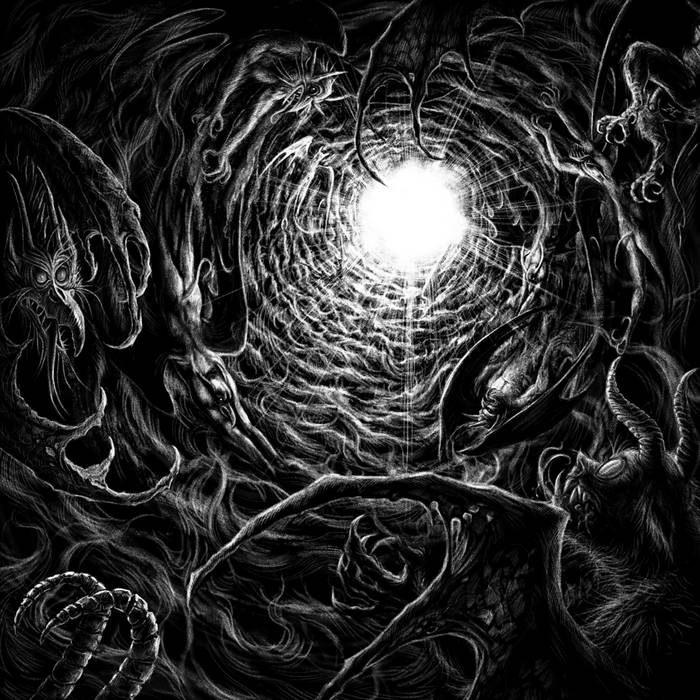 Matthew Toye Temple Desecration run on their own momentum. There's an untamed hypnosis that courses through their debut, resulting in an engrossing and intensely frightening listen. One of my favourites this year. Favorite track: Covenant.

Since TEMPLE DESECRATION's beginnings in 2011, this mysterious Polish cult have been a study in refined ugliness. Prizing quality over quantity, each release has been exacting, yet executed with animalistic abandon. It began in 2012 with the very-aptly-titled Abhorrent Rites demo - which IRON BONEHEAD later released on 12" vinyl, in 2015 - and carried forward to the dread expanses of the Communion Perished EP in 2014. There, at just two songs in a swift 13 minutes, TEMPLE DESECRATION indeed desecrated by-now-passe "bestial metal" conventions into something angular and truly overwhelming, incensed by the form's latent power but focusing it into an ever-roiling maelstrom that was worlds away - and suggested, even, other worlds.

With the stage thus set, a whole four years later, TEMPLE DESECRATION return to maximize that enviable potential with their first full-length, Whirlwinds of Fathomless Chaos. Massive in every measure, Whirlwinds of Fathomless Chaos is indeed a whirlwind, but any chaos extant in the band's sound has been excised for locked-in, monged-out hypnosis. It's a tradeoff that works in spades, as TEMPLE DESECRATION's vile, virulent pulse becomes more patient and yet more mesmerizing, eventually devouring the listener whole - or at least sucking said listener into a black hole, many worlds away. The more expanded song structures first explored on Communion Perished are here finessed even further, building new pillars of pustulent terror and crushingly physical tension: at five songs in 38 minutes, the sheer density and solar weight of Whirlwinds of Fathomless Chaos feels far more expansive than its compact runtime suggests.

These advancements aside, TEMPLE DESECRATION have also managed to make their mangling of the bestial idiom more ritualistic, more ceremonial. That pulse may still be tethered to black/death traditionalism - it is METAL, after all - but the way this cult warps their riffs into slithering sensations of sound elevates Whirlwinds of Fathomless Chaos above the mongrel hordes listlessly flying that "bestial metal" banner. In short, there is transcendentalism coursing through every minute of the album, and TEMPLE DESECRATION have hereby unlocked its boundless enormity.

Gaze into its cover art - faintly, deeply, whichever - and begin to contemplate the enormity of TEMPLE DESECRATION. For these Whirlwinds of Fathomless Chaos stretch beyond The Beyond...