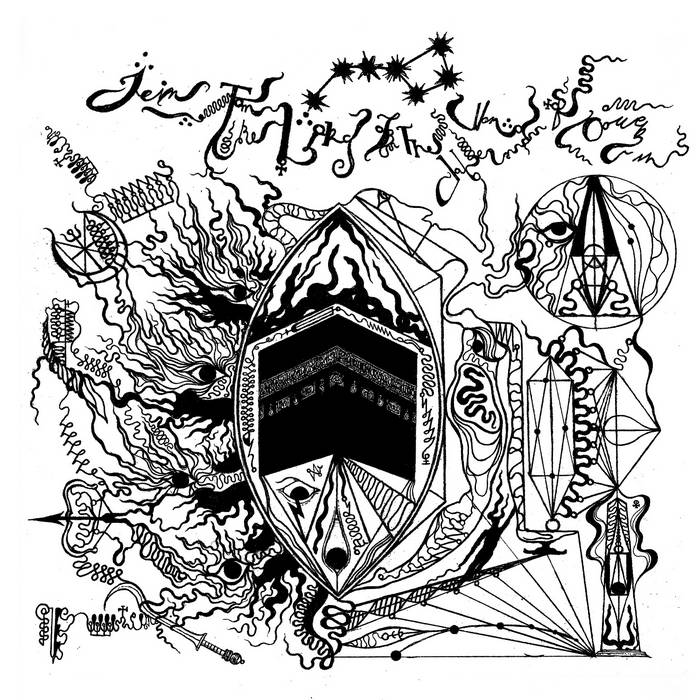 Adam Lehrer/Safety Propganda There are so many great metal bands still that I almost wanted to hate this when my friend told me about Tetragrammacide. But alas, no, it’s fucking brutal as a blunt object and transcendental as a ketamine hallucination in a room full of mirrors. I am prone to write off the chaotic noise meets extreme metal these days. Too much of it. But this strikes the balance. Genuine riffs surrounded by swarms of white noise and chaos. Love.
more...

One of the most genuinely threatening and overwhelmingly violent metal bands of modern times, TETRAGRAMMACIDE truly began their explosive reign with the Typhonian Wormholes: Indecipherable Anti​-​Structural Formulæ mini-album, released in late 2015 by IRON BONEHEAD. Then a duo, this Indian cult quickly reaped widespread acclaim (or general awe, at least) for how shockingly savage and unremittingly noisy Typhonian Wormholes was. And yet, underneath all that blown-out barbarism and in-the-red frequencies lay an accomplished black/death band who were simply waiting for an opportune time to reveal a clearer portrait of their sonic holocaust. And now, that time has arrived with Primal Incinerators of Moral Matrix.

Now a power-trio, on Primal Incinerators of Moral Matrix, TETRAGRAMMACIDE immediately lay bare their mission to decimate all contenders and pretenders left in the wake of Typhonian Wormholes' mushroom cloud. And indeed, after the unsettling intro, Primal Incinerators of Moral Matrix soon establishes a more sonically lucid style for the band: far clearer, stripped of noise both intentional and incidental, but swirling more severely and savagely into a fever dream of palpably physical heft, the trade-off works in the band's favor, and establishes a new paradigm for TETRAGRAMMACIDE whilst not abandoning their initial foundation entirely. As the album plays and slays on, it quickly becomes apparent that TETRAGRAMMACIDE have a dexterous songwriting ability in their already-bursting arsenal; from gutted ultra-grind to world-eating doom, all extremes are explored here, making the sensory overload all the more expansive.

Early on, references to TETRAGRAMMACIDE's progenitors could be made - early Nyogthaeblisz, earlier Goatpenis, later Nuclearhammer, any Intolitarian - but now, the Indian trio can stand alongside them as contemporaries, as they've now firmly established a genocidal aura all their own. And despite the concessions toward sonic clarity, they still don't belong to the "black metal" scene, nor especially the "death metal" one; "war metal" is still an apt appellation, but not as most understand it. Which is all to say nothing of TETRAGRAMMACIDE's crypto-scientific/occultic lyricism, which is taken to the furthest extremes on Primal Incinerators of Moral Matrix. Deciphering the codes behind titles like "Meontological Marga of Misanthropic Computation & Extensive Backwards Physics," "Radicalized Matrikavyeda Operation: Militarized Cosmogrids Destabilization (Heralding Absolute Contraction)," and "Intra-Dimensional Vessel of Were-Robotics, N-Logics and Assorted Lattice Intelligences," among six others, is much like wandering amidst the hyperspatial audial vortex of the album itself.

More martial, more miasmic, and more fully serving the powers of chaos, TETRAGRAMMACIDE have once again created a soundworld - this time, bigger and more OTT - where there is no hope, no mercy, NO FUN: no "scenes" exist because they've been obliterated by undulating, uncompromising waves of sonic hatred. When faced with Primal Incinerators of Moral Matrix, survival was never an option, for submission begins the second you press "play."