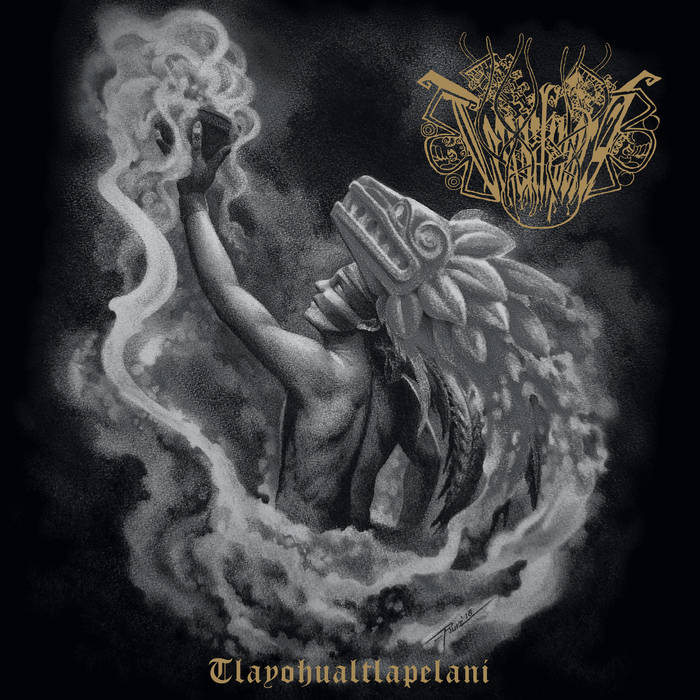 Matthew Toye I've never heard black metal ever sound like this. The band's second album is quite an experience and the aboriginal instruments really take their furious black metal into a whole other dimension of being. Favorite track: In Tzinacan Itlayohualpatlaniliz.

Hailing from the fertile Mexican black metal scene, TEZCATLIPOCA create some of the most mystical and mesmerizing sounds emanating from the continent. But, let it be known that TEZCATLIPOCA are staunchly inspired by - and create pagan/folk black metal for - the cult of the ancient Mexicans. War, death, the occult, mythology, and sorcery: all this went into the band's debut album, Ipehualtiyayohually, in 2015. Something of a cult classic for those who had the privilege to hear it, that bold 'n' brazen debut has now been eclipsed by Tlayohualtlapelani.

Once again inspired by the cult of their Mesoamerican ancestors, TEZCATLIPOCA render forth a work that's as dizzying as it is daring, suffused with majesty, supremacy, and cosmic mysticism. Hailing by the title Tlayohualtlapelani, the band's second album billows forth in a haze of '90s-entrenched classicism, but with a distinctly southern flair. Not for them the freezing climes of Mother North, nor even the ancient duskiness of Southern Europe; no, TEZCATLIPOCA exactingly execute a sort of black metal that's muscular and atmospheric in equal measure, igniting a flame that it is a small but significant tribute to the glory of all those who offered their blood to keep the cosmic machinery in motion. Indeed, the fastuosity and mysticism of the old Mexican world infuses TEZCATLIPOCA's music with a characteristic sound both somber and strident, triumphant yet austere: aggressiveness and obscurity collide head on here on Tlayohualtlapelani, with the band's incorporation of native Mexican musical instruments taking center stage as well as the Nahuatl language reinforcing their ideology.

Both aesthetically and sartorially, TEZCATLIPOCA are quite beyond compare in the nowadays black metal scene, especially during the band's live presentations. With iron-fist intent, Tlayohualtlapelani transmits a pride descended from aborigines, especially from Mexican aborigines!

By the Ancient Mexicans!