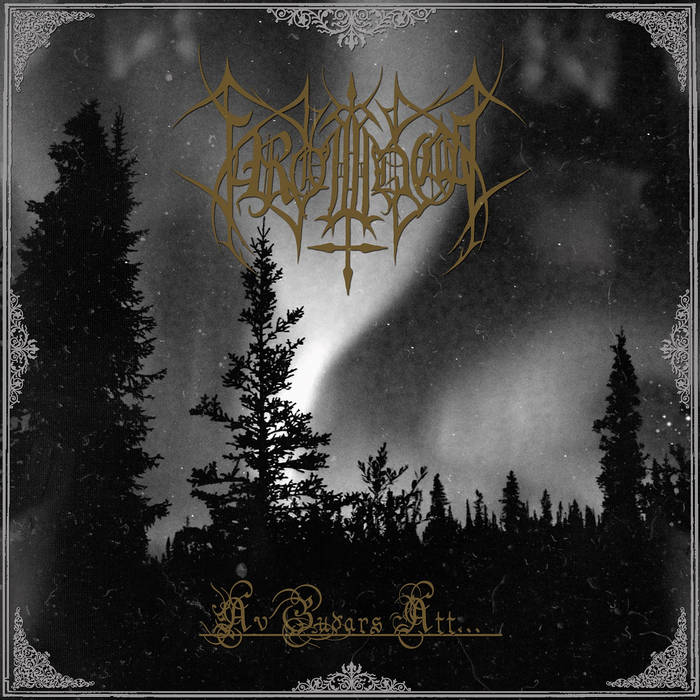 IRON BONEHEAD PRODUCTIONS is proud to present one of TROLLDOM's two highly anticipated debut albums, Av Gudars Ätt, on CD and vinyl LP formats. The band's other I Nattens Sken will be released simultaneously.

TROLLDOM is a name that goes back many years. While the band's date of origin is unknown, the first demo, Av gudablod röd..., was released in 2016. That TROLLDOM played authentically vintage second-wave black metal should hardly be suprising considering it came under the banner of Ancient Records linchpin Swartadauþuz (Azelisassath, Bekëth Nexëhmü, Muvitium, Greve, MUSMAHHU, Digerdöden, Gnipahålan, Mystik, Summum, Daudadagr). Back then, his rabidly prolific nature was just starting to blossom, and TROLLDOM was yet another new-yet-old creation that contributed to his wider cosmology whilst standing on its own.

Alas, tireless as he was with his myriad bands, Swartadauþuz didn't publicly revisit TROLLDOM...until now, with the simultaneous release of TWO albums. Of them, Av Gudars Ätt highlights both dynamics and desolation within his second-wave sensibilities. The album's music was written between 2014 and 2017 and recorded in 2018, while the mixing/mastering came in 2021. While TROLLDOM's spectral 'n' stargazing style of black metal mysticism remains firm between the two full-lengths, the five (mostly) epic tracks comprising Av Gudars Ätt unfurl a vast landscape of sonic/psychic color, going from sparse and almost-comforting tundras of ambience to majestic, stained-glass spirals of malevolence and plenty more in between; nearly every moment sounds monolithic and regal, no matter the tempo. Taken another way, Av Gudars Ätt's cover art perfectly illustrates its contents just as its counterpart's does.

If any doubt ever lingered about the power and poignancy of Swartadauþuz's projects despite their prolific nature, TROLLDOM trounces all doubters with the twin-attack of Av Gudars Ätt and I Nattens Sken. Purer expressions of '90s black metal classicism one will not find nowadays, and both effortlessly transport the listener to forgotten realms and glorious times.