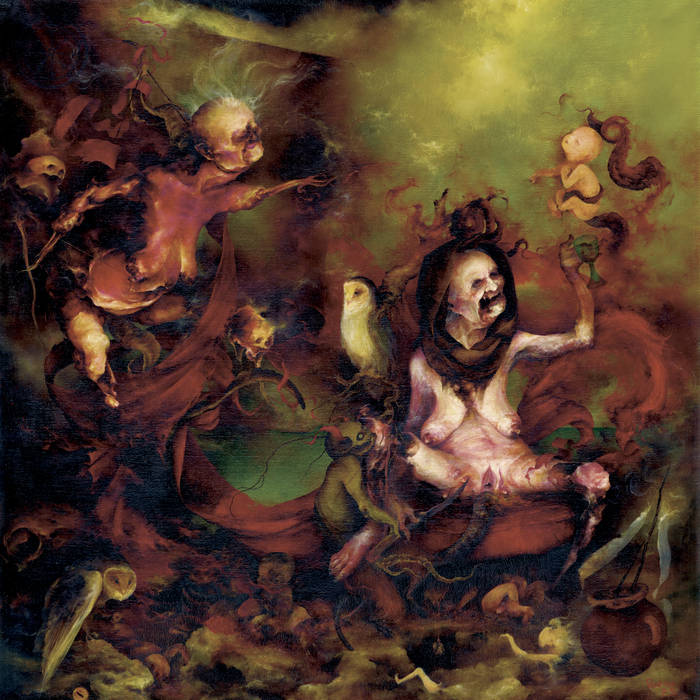 𝖙𝖜𝖎𝖘𝖙𝖊𝖉𝖘𝖔𝖓𝖔𝖋𝖜𝖆𝖙𝖘𝖔𝖓 Fucking rips! Came to these purveyors of occult death way too late, but better late than never. Absolute must amidst the deepening quagmire of death metal out there. Favorite track: Sacrificio Infanticida.

Matthew Toye These death metal elders were one of the first bands I heard from the Chilean underground and they're still one of my favourites. Album number four is another statement of their power and flair for the dark arts. Favorite track: The Mark Of The Devil.

Rich Kinman I love this because it's got a darkened death metal feel that many bands could try but never get it! You guy's throw down!

Verily a summation of the UNAUSSPRECHLICHEN KULTEB aesthetic to date - songwriting that slithers through the slime with a preternatural grace, execution that's barbaric and crusted in mud and blood, production that plumbs the foulest ends of the sonic spectrum - Keziah Lilith Medea (Chapter X) possesses an immediately engaging aura of demonology and witchcraft. In fact, such themes are central to Keziah Lilith Medea (Chapter X), as explored in the album's 12-page booklet, with liner notes painstakingly crafted by the band. "This Chapter is inspired by women, the persecution against them by the Holy Office Sacred Congregation (The Inquisition), their essential role in the myth and legend, their place at the witches’ Sabbath, and the profound fear they spread - and still do - in mankind under the concept of Witch." Further, as the band explains, "The ancient pagan cults awarded a leading role to the woman inside the spiritual. However, in medieval Europe, among other things, the exaggeration of the divinity and chastity of the feminine, the exaltation of virginity and motherhood as unique roles for women - the image of the Virgin Mary - create a shadow, a mirror image, an opposite principle. The repression of sexuality and denial of the Soror Mystica incubated a mysterious, dark, and evil female image."

Across its taut, eight-song/39-minute duration, Keziah Lilith Medea (Chapter X) displays an UNAUSSPRECHLICHEN KULTEN at their most frighteningly feral and also most devilishly nuanced. The songs' successive slipstreaming surge creates a miasma of blunt-force trauma and hallucinogenic tension; any dynamic and detail the band wish to engage in is delivered with an almost unsettling, paradoxical grace. Keziah Lilith Medea (Chapter X) takes all the urgency 'n' ugliness of classic death metal and upends into the realm of high art. That assertion is further elucidated by the aforementioned booklet gracing the album, as well as its ominously striking cover. As if their bounty wasn't already overflowing, UNAUSSPRECHLICHEN KULTEN here deliver a work for the ages.