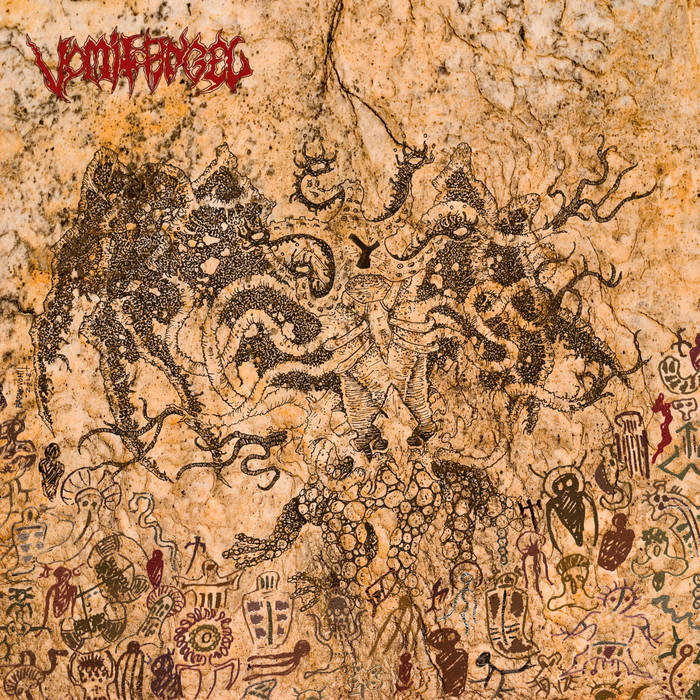 VOMIT ANGEL was formed in 2014 as a solo-project by Necrodevil (ex-SADOMATOR / SADOGOAT). The plan was to do some bestial black/death metal in the vein of SADOMATOR since that band was more or less defunct by that point. In 2015, Lord Titan (ex-SADOGOAT) took up drumming again after a 13-year hiatus and joined Necrodevil for a one-off gig with SADOGOAT, to celebrate the anniversary of Ancient Darkness Records. Things went so well that Necrodevil and Lord Titan decided to work together again, and so Lord Titan joined VOMIT ANGEL.

Soon, VOMIT ANGEL's musical direction (d)evolved and became more grinding, and eventually, the style was set and recording of a debut mini-album commenced. Released in 2016 by longtime SADOMATOR supporters IRON BONEHEAD, VOMIT ANGEL's Sadomatic Evil was musically a mix of songs in the old SADOMATOR vein and the more grinding direction the band was taking. But already, the lyrical universe was chosen to evolve around personal experiences, dealing with stories from the past and current life of the duo. The mini-album was received well by the fans, being enjoyed both by old SADOMATOR / SADOGOAT fans but also gaining a host of new fans. Sod Corpse (Ligfaerd) was helping out on bass guitar on the mini-album and live at Metal Magic Festival 2017.

Later, Peter Hugorm (Pustulation/Würm's Tongue) took over the session bass-guitar duties and can be heard on VOMIT ANGEL's imminent debut album, Imprint of Extinction. But Hugorm is no stranger to the band since he already helped out at Metal Magic in 2017, too, by delivering deadly guitar leads at the show. Thus armed, 2019 will show VOMIT ANGEL's fully developed musical direction, as Imprint of Extinction contains a blasting mix of shorter grindcore songs and mid-length, more death metal-oriented songs. All in all, a deadly combo of death metal, grindcore, and the band members' more-than-20-years involvement / evolvement in the underground - and of course, that touch of distinctive SADOMATOR madness.

Further, 2019 will also see the release of the Cacodemon split 7" with blackgrind comrades Satanik Goat Ritual, which also marks the goodbye to Sod Corpse, as this will be his final work with VOMIT ANGEL (for now), as he needs to concentrate on Ligfaerd and personal life. From here on out, VOMIT ANGEL plan to play a few select shows each year, record more songs when possible, and generally spread their style of Sado Grind Metal or Gliimszbieriig Metal as much as possible.