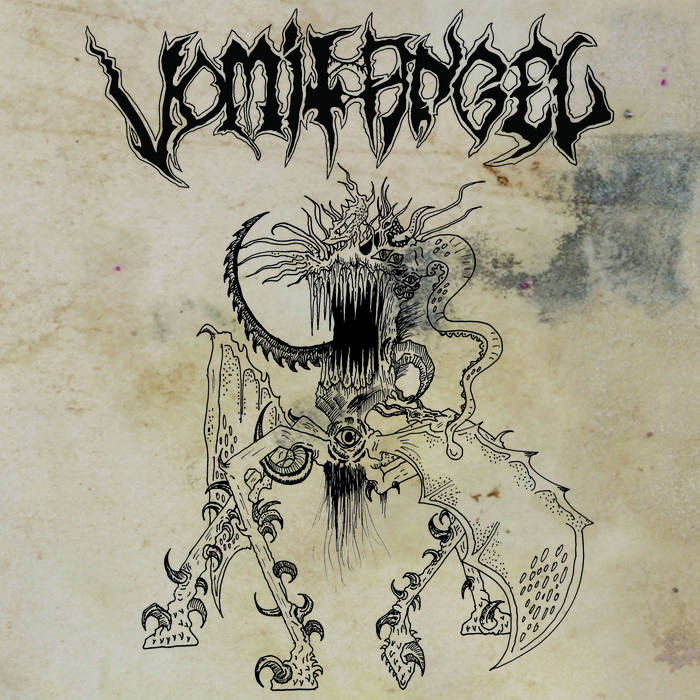 IRON BONEHEAD PRODUCTIONS is proud to present VOMIT ANGEL's debut mini-album, Sadomatic Evil, on 12" vinyl. Although Sadomatic Evil is the Danish duo's debut recording, VOMIT ANGEL comprise two founding members of Sadogoat, who preceded the bestial metal resurgence by many years, and who later wielded more influence on the black/death underground as Sadomator, who released three pivotal LPs on IRON BONEHEAD which perfected the Blasphemy/Beherit axis to a T.

Now, under the banner of VOMIT ANGEL, Necrodevil and Lord Titan aim for an equally scuzzy attack that's less categorizably "bestial" on the surface. On that surface, instead, is a pulsing, slimy spew of gangrenous primitivism somewhere between the very earliest death metal and black metal in the South American tradition. It's still within the characteristically filthy sphere as Sadomator, but with a dark 'n' disgusting aspect all its own. And, in a mere 19 minutes, its eight tracks insult and injure with succinct salaciousness - literally, to paraphrase one track, a "Blasting Black Goat Attack."

No hope, no fun, no sobriety: this is VOMIT ANGEL's Sadomatic Evil!